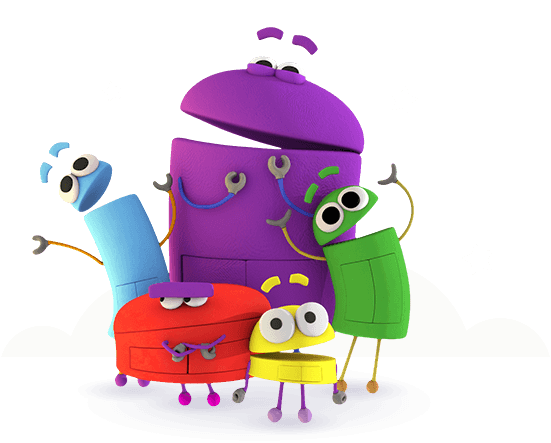 I’m pretty obsessed by cartoons, can you tell?  I’ve already blogged on Beat Bugs and Kazoops.  Today it’s another Netflix series, Ask the Storybots.   The cartoon is full of live action shots mixed with different types of animation.  The guest stars in this show are phenomenally random and quirky; Kevin Smith, Garfunkel & Oats, Weird Al, Jay Leno are a few.   And the music is so easy to listen to, I’ve been singing the Chicken Chicken Bop all day.  Storybots Super Songs is the spin off show  that focuses on broader topics, such as outer space, colors, shapes and dinosaurs, through music and live-action vignettes with real children.  We also have the Storybots app on our iPhones,  the ABCs are so much fun  (It’s free on iPhone for the basics!  I like free).    JibJab, yes that viral video from like 10 years ago, created this fun educational cartoon.

I was surprised to learn that Storybots launched in 2012, as a multi-platform learning program aimed at children ages 3-8.  We will definitely be subscribing in the next year.  But I had never heard of it until it popped up on my Netflix suggestions.  Excellent suggestion Netflix, btw.  I love it and obviously more importantly, the kids love it.   I’ve  even caught the ten year old, who is too cool for most cartoons watching it several times.

The ways the concepts are explained through exploration and investigation and then further reinforced with a song is fantastic.  A child asks the Storybots (Beep, Boop, Bing, Bang and Bo) a question like why is the sky blue, how do airplanes fly, why does it get dark,  or where do french fries come from.  You can actually video your children asking the Storybots questions, email them  here.      Then the Storybots embark to the outworld (outside of their computer home) to find the answer.  This is when the animation type changes from the 2d classic animation to a 3d fun look.  They ask various people about the topic and have frequent musical breaks.   After their quirky adventure they come back and tell the child who asked the question the answer.

Ask the StoryBots has received critical acclaim for its educational quality and entertainment value for both parents and children and it was recently announced that Ask the Storybots was nominated for Best Animated Television/Broadcast Production for Preschool Children at the 44th Annual Annie Awards.     You should check out their Youtube channel right now.