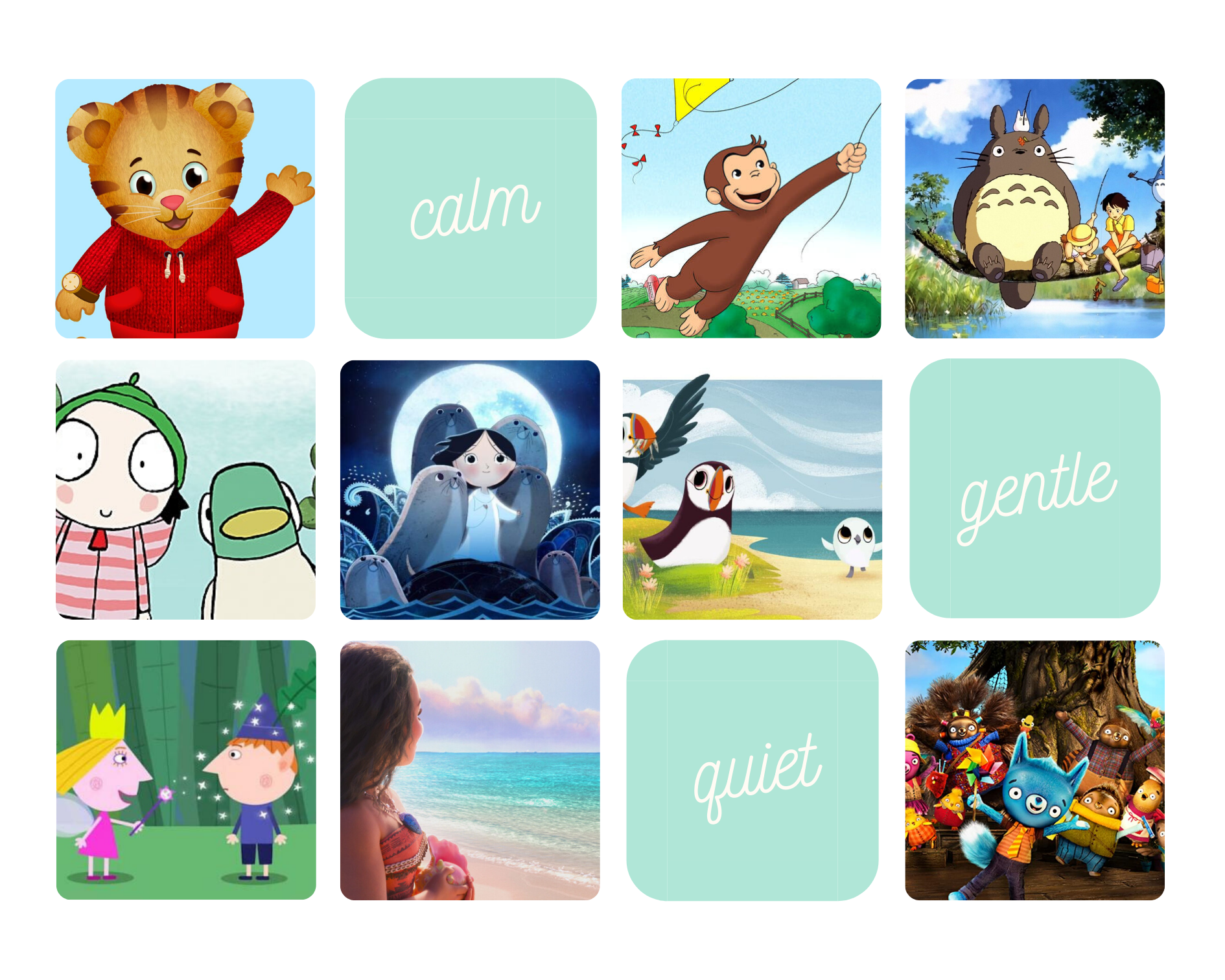 “You can learn many things from children. How much patience you have, for instance.”

Even the most energetic kids need some downtime and parents deserve a few moments to sip a tea and collect their thoughts.  This pandemic has made this more true than ever. Parents are getting less breaks, dads are exhausted, moms are snapping (at least thats what’s happening in our home).  A 12 minute show on Netflix or Disney+ can save the day.  These are my favorite calm and gentle cartoons for my wild children. These non-violent sweet simple shows will make your day better.

Cheers to a few quiet moments y’all, you deserve them.

“Parents need to know that Puffin Rock is a gentle preschool series that introduces kids to some basic concepts of science as they relate to the characters’ explorations of their island habitat.”  Common Sense Media

“In a brand-new short-form series called Zenimations, Disney has remixed scenes from the large vault of its movies and turned them into calming short videos that lack all the stuff that will make you jumpy. In the first video, just called “Water,” we are treated to the beautiful animation from Moana, The Little Mermaid, and yes, Frozen, but without any dialogue, music, or goofy sound effects. The only sounds accompanying the familiar (and lovely) images are the sounds of nature. With “Water,” it’s ocean sounds. In the video called “Night,” it’s just all cozy nighttime stuff — like a white noise machine and crickets chirping while cool scenes play from Tangled or whatever.” Fatherly

“Parents need to know that Tumble Leaf‘s vibrant animation and colorful characters will draw preschoolers to this gently paced series, in which the characters make exciting discoveries that teach simple science concepts. The content is nicely suited to a young audience, as are the standout messages about friendship that play out among the diverse animal cast. Positive examples of problem solving and other prereading skills such as rhyming and basic shape recognition are woven into the stories as well.”  Common Sense Media

“Parents need to know that George’s curiosity is contagious and will probably encourage preschoolers who watch Curious George to explore their surrounding in similar ways. That’s great, but it also means that little ones need to be cautioned about certain things George does that may actually be dangerous in real life (even though they’re treated with humor on the show). A little parental guidance should steer them in the right direction.”  Common Sense Media

“Parents need to know that Ben & Holly’s Little Kingdom is a British animated series that centers on a sweet friendship between a fairy princess and her elf neighbor. The show’s vibrant animation is a big draw, and preschoolers will love the young characters’ comical adventures. But the stories offer kids much more than entertainment; they’re brimming with illustrations of friendship, kindness, and teamwork. The characters’ experiences also remind kids of the value of learning from the mistakes you make. “ Common Sense Media

“Parents need to know that Sarah & Duck is a gentle preschool series with delightful animation and simple stories that cater to young kids’ experiences and natural curiosity. The friendly characters’ zest for learning new things reminds parents and kids of the joy of doing the same, and their experiences show positive examples of solving problems. Age-appropriate skills like counting and picture recognition round out this whimsical series.” Common Sense Media

“Parents need to know that My Neighbor Totoro is a fine pick for the entire family. Although there are slightly creepy “dust sprites” that appear in the house at first, they eventually disappear. Totoro himself might look and sound a bit odd, but he’s quite sweet and gentle. The protagonist girls have an ill mother with an unnamed disease, but the moments in the hospital aren’t sad or depressing. Some parents may not feel comfortable with the amount of freedom the girls (as is the case with children in all of Hayao Miyazaki‘s films) have to wander off alone, either around their neighborhood, the surrounding forest, or on a long walk to visit their mother. Overall, this is a family film in the truest sense — it appeals to moviegoers young and old alike.” Common Sense Media

“Parents need to know that Daniel Tiger’s Neighborhood is produced by The Fred Rogers Company and, aside from being an animated series centered on a young tiger, closely parallels the gentle tone and emphasis on social strategies that have made Mister Rogers’ Neighborhood a TV icon. Preschoolers will be drawn to Daniel and his friends, and his experiences will validate the emotions they experience — such as disappointment, sadness, frustration, and joy — before demonstrating age-appropriate techniques for dealing with them. The show has strong messages about friendship and family bonds, as well as respect for curiosity, and each story offers opportunities for basic preschool skills like letter sounds and counting. This delightful series is a well-rounded choice for little kids, and parents who have fond memories of Mister Rogers will enjoy revisiting his messages with a new generation of characters.” Common Sense Media

Song of the Sea on Netflix

“Parents need to know that Song of the Sea is a beautifully hand-drawn animated adventure about Irish myths and legends, predominantly selkies — creatures that live as humans on land and seals in the water. While Song of the Sea is less intense than the director’s previous film, The Secret of Kells, it can still be intense and heartbreaking at times — like when it seems the kids might not survive, that Ben will drown, or Saoirse will succumb to her mysterious illness. It’s implied that their mother dies early in the film (right after baby Saoirse is born), and the Macha and her owls can be creepy and scary, particularly when they go after the kids. But in the end this is a powerful movie about the importance of sibling relationships, about accepting everything you feel (no matter how sad or scary), about literally and figuratively finding your voice, and about doing everything possible to protect the people you love.” Common Sense Media

I know I’ve ranted about screen time before, but these short shows are such a lifesaver right now.  Mom and Dad, you deserve a break and a high five (with hand sanitizer of course).